Volunteers coordinator in Eilot
Kibbutz Eilot is situated on a hill only three kilometers north of the city of Eilat since 1962. It overlooks the Red Sea to the South, and Edom Mountains in the East. The kibbutz farms extensive fields in the Arava Valley, part of the great Syrian-African Rift Valley, along the Jordanian border. The fields of Eilot are linked to historic events such as the signing of the Peace Treaty with Jordan (1994). The Islamic conquest in the 7th century A.D. also left its mark in its fields.

Millions of birds pass through the fields of Eilot during the spring and fall migrations between Europe and Africa. Kibbutz Eilot has 1000 dunam of vegetable fields where crops such as tomatoes, onions, corn, and peppers are grown for export and the local market. Three major strains of dates are grown in 500 dunam with approximately 5000 trees and 70 dunam of mango trees separate kibbutz Eilot from the city of  Eilat. Five hundred dunams of vineyards are owned in partnership with a private company. Aside from tourism, Eilot has a small factory, Eilor, producing and exporting transformer cores.

The cowshed in Eilot has become a solar field. In Eilot there is also a packing house, where sorting and packing of agricultural produce is done, including date sorting in the season. In the fields of Kibbutz Eilot, a quarantine is made for animals (storage for a certain period for the purpose of determining a healthy state of health) that arrive from Australia and are marketed in the Palestinian Authority and in Israel.

In Eilot, the population is diverse. In addition to kibbutz members, it also includes residents and children of the Naaleh group who come from the CIS countries to study and be educated in the kibbutz movement. Around 400 people living today in Eilot, with around 10 international volunteers. Its volunteers mainly work in the dates, packing house, factory, gardening and other services such as dining room, etc... 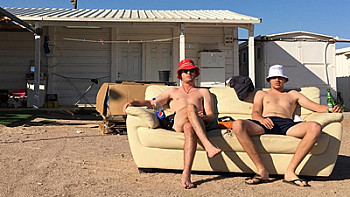